As more and more people are being aware of the toxicity and ill effects of carbohydrate loaded diet, they are caught by the dilemma what to use as a substitute for the carbohydrates that will bring an equal amount of the energy into our body as the carbohydrates do.

The obvious choice falls on meat.

There is a confusion about what meat to use? What meat is better or healthier?

Very often if I ask someone if they eat meat they say no. I only eat fish.

Well, fish is meat. Meat is a name for an animal type of protein. Since the fish is an animal, its muscles we call meat.

Same is the case with the chicken.

All types of animal proteins are easily digestible for all humans but there is a glitch.

The glitch comes from our miseducation telling us that meat has to be well cooked.

Cooking will destroy parasites and the bad bacteria and it will make the meat easier to digest. So we are told.

This is another lie that was perpetrated upon us.

When the animal is healthy, it does not have any parasites or bacteria that we should worry about.

Since the commercial animals are fed with unhealthy types of food, the animals have weak immune systems, same as humans do, so they can be easily infected. This is why all animals are being fed antibiotics and they are inspected after they have been slaughtered to make sure that they were ok.

After that, the meat is frozen. Freezing will kill any parasite that may have passed the inspection undetected.

So the hormones and the antibiotics being used to speed up the meat production are more of the threat to our health than parasites and pathogens.

As there is an increase in the number of people following the ketogenic diet and many articles on the Internet and in the medical books are warning against heavy consumption of meat for health reasons here comes the dilemma. What meat is the best to eat and how much of it to eat and stay on the safe side as far as our health is concerned?

The saturated fat has double the caloric value of either the carbohydrates or the animal protein.

This means as you eliminate the carbohydrates from your plate, you have to add the equal amount of meat or a half of its volume substitute with animal fat.

Well, not exactly, because when you eat correctly, you will be less hungry and you will seldom overeat as we usually do when we eat carbohydrates.

Why is that so, I explain in my book “The Resonance of Nutrition”.

Since we have to increase the intake of meats and animal fats, what is the safest meat for us to use?

All types of meat are safe for us to use and we can indulge in the meat without worrying about our health. Animal protein has the same composition as our protein so it will be the best source of amino acids for our body.

In our digestion, protein is being dismantled into amino acids before it will be absorbed by the small intestines. Here the amino acids will be used as the building blocks of the cholesterol, some will be sent into the bloodstream and be distributed through out the body including the liver. They will be used by our cells to form necessary proteins but if there are more amino acids than what is required at the present time, they will be converted into the energy and triglyceride which will be stored as fat to supply the cells with the energy in the future.

So as you can see, there is no danger in consuming higher quantities of animal protein.

Where the health issue comes into question as far as meat is concerned, is the way we eat the meat.

The meat is healthy if it is eaten raw or when it is exposed to the smallest amount of heat as possible before consuming it. This way all the enzymes are intact and the meat will self-digest so there is no possibility for it to linger in our digestive tract for any considerable length of time. The digestion will be complete so only a small amount of meat will take you a long way as far as the energy is concerned.

By heating the protein we are dehydrating it and eventually, the protein will coagulate. Coagulate protein shrinks because it compacts itself. All enzymes will be destroyed so there will be no self-digestion and our digestive enzymes will not be able to penetrate into this hard compact mass. Such meat cannot be digested and it will linger inside of our intestines until it is broken down by the gut bacteria and fungus. This process we call putrefaction or rotting. This produces bad odor, gas, and toxicity.

Now, as you know how to eat the meat safely, do not hesitate and do not worry. Animal proteins and fats are the best sources of nutrition for every omnivore and since we have the digestive system of omnivores, animal based foods provide the best source of nutrition to our body. 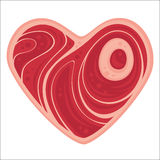